“Our academic community of faculty, students and staff is characterized by a culture of interdisciplinary collaboration that is responsive to the needs of our multicultural and global society.”

While the above mission statement applies to all of UCSB, the Kavli Institute for Theoretical Physics is a stand out facility on campus where the whole point is creating a global society, all in the name of science.

“KITP’s existence is all about bringing premier scientists together for long periods of time. They come here from all around the world to work at UCSB, said Lars Bildsten, Director of the institute. Half [scientists] are from outside the United States and ages range from twenty eight to eighty-eight.”

Bildsten had a vision of a facility where hundreds of scientists and their families could come to KITP for what are often studies lasting several months, but all live in the same quarters. Before now, scientists were spread across campus in apartments and cottages with no simple and quick means of communication, often leaving large gaps in their critical thinking processes. In fall of 2014, however, a $65 million donation from Charlie Munger put a project in motion that would bring scientists together on a full-time basis.

“The main goal of the project was to keep that cadre of people together through the nights and the weekends because if we keep them together, they’ll just keep doing science,” said Bildsten.

With this specific vision in mine, Munger and Bildsten teamed up with The Towbes Group, a construction and property management firm found locally in Santa Barbara, along with Riviera Bronze Steel Doors & Windows, located 40 minutes south in Ventura, California.

“There’s no real model for this, so it’s been enjoyable to go through the process…but I would say this is one of the more fun project teams that I’ve had the pleasure to work with, said Derek Hansen, the VP of Construction at Towbes. Subcontractors were engaged early and everyone was wanting to see the project.”

“We had already had an initial design much smaller in scope than what we have today and then we worked with Charlie for about two years on the design,” said Lars, who insists Charlie’s involvement in the project has been nothing short of a full-time job.

“Much of the design you see is a result of collaboration with Charlie. When he realized what our mission is at the institute, to him it was obvious it was something he wanted to support because he really see’s the value in convening people and having them think differently and work together,” he said.

“The custom aspect in the end was really key, said Lars. It’s going to make it pop—it is the feature. The windows are going to make the exterior.”

Aside from the aesthetics of the windows, first impressions of the Riviera Bronze showroom and factory were ultimately a contributing factor in the choice to contract the custom luxury steel window and door manufacturer to the project.

Hansen said, “I was most impressed by your use of the facility and the pride and look of the shop. Everyone I talked to and saw at your shop when we walked through was polite, engaged, and on top of it. Nothing was overlooked. I had confidence that each of the products would come out with the quality control that was fitting the building itself and we wouldn’t have to worry about it.”

The KITP project is set to be completed later this year, but the lasting effect the institute will have on the science world cannot be overlooked. Without Bildsten’s vision and Munger’s support of that vision, this project may have never seen the light of day. Nearly two years later, the project is nearing completion, and with the help of The Towbes Group and Riviera Bronze, the institute will not only be staple in the world of physics, but will stand the test of time as one of the most beautiful and unique facilities in the world! 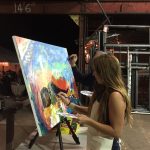